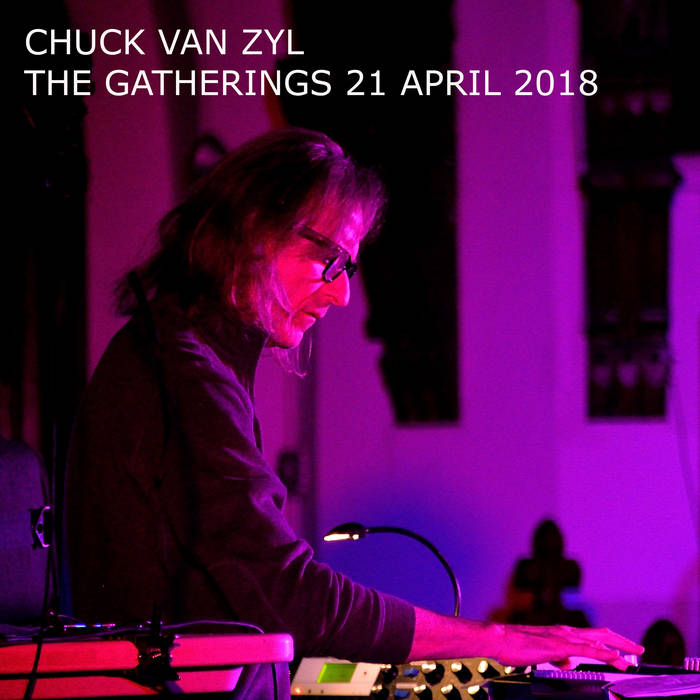 kevbird helped us sleep quite often

Nimrod Scott Chuck’s live concerts produce a lively interaction with space and time. His flawless command of Berlin School sequencing and splendid accompanying pads magnify the delight of the moment. This is another concert captured and awaiting attentive listening.

Best known as host of STAR'S END (WXPN's renowned radio program of spacemusic dreamscapes) and as coordinator of The Gatherings (Philadelphia's premiere concert series of innovative music), Chuck van Zyl has also been making his own unique style of electronic music since 1983.

Using a variety of modern analog synthesizers and sequencers, and operating at an emotional and enthusiastic pitch, Chuck van Zyl realizes music that possesses as much the buzz and crackle of electricity as it does the frigid black of space.

From his instrument's storm force of sound comes delightful throbbing bass lines, echo-warping chimes and a mystery machine pulse, against which van Zyl sways and plays synth strings, Mellotron choir and full-blooded lead lines. Synthesizer blips interlock, and pound out mighty sequencer patterns, yet this mechanical rigidity is somehow softened - as lines of dancing arpeggios pump up against tuneful melodies and ethereal harmonic progressions. Further in, disarmingly quiet passages reduce the level of density and energy with insinuating modulations and vaporous aural forces.

Throughout his live sets, van Zyl pushes and pulls, expands and contracts the music, and manages to establish an engaging contour through various scenarios and scenes... to attain a rare unity. Offering vivid synthesized sonorities his music's appeal lies in its minimalist values, and in this musician's ability to create an intimate and absorbing listening experience. Anyone in love with Spacemusic and its very specific poetry will want to hear this work in concert.

Please view the video excerpt of this concert:
youtu.be/OloNoME2fbk

Proceeds from the sale of "The Gatherings 21 April 2018" by Chuck van Zyl go to support the efforts of CIMA of PA, the IRS recognized, non-profit, all-volunteer organization which oversees The Gatherings Concert Series in Philadelphia.