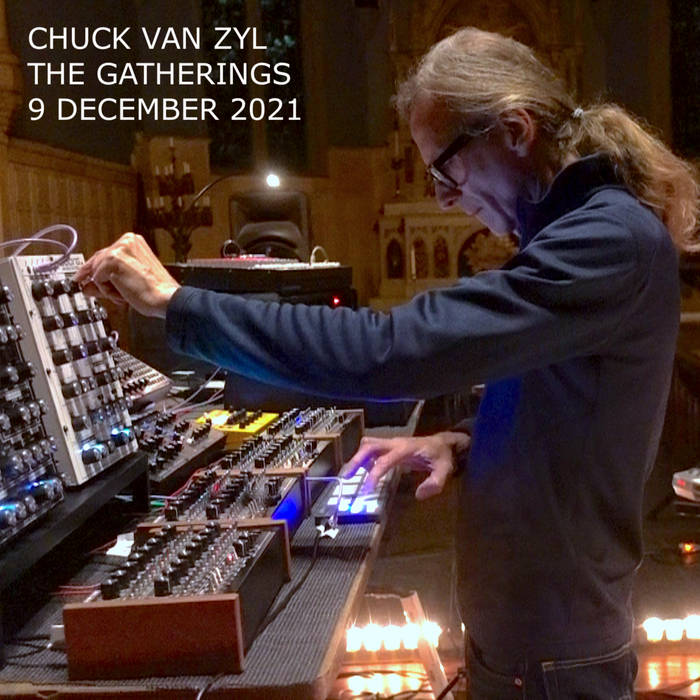 In early December of 2021 a circle of CIMA of PA donors assembled in the church sanctuary of St Mary's Hamilton Village for an intimate "Candle Concert" with noted Electronic Musician Chuck van Zyl.

"The Gatherings 9 December 2021" (72:01) presents the complete continuous set by Chuck van Zyl. Held during a time of great uncertainty, his concert realization "Night Prayer" was made live in the moment before a small yet enthusiastic, informed audience. As these conditions are known to reveal an innovative spirit, we find the musician and listeners experiencing this extraordinary music together in the act of it being made. Energized equally by the pulse of the Berlin-School and the hope of the New Age, the remarkable setting and welcoming company brought out a substantial, expressive and meaningful performance.

Lithe in movement, incisive in diction, finished in tone, vivid in an elemental way, concerts by Chuck van Zyl brood, then celebrate the world. Commensurate with its dark magnificence this live set began with the deeper spatial impressions Spacemusic affords. The furtiveness it encourages bestows a sedate equilibrium - known especially well to this artist. Gleaming in the night, the sound hollows out beneath us, pulling us along - toward strobing power electronics. As soon as one note pattern rises and clarifies another is born, building monumental musical structures in echoing layers of mechanized motifs. Settling into a subtle Berlin-School sequencer dance, the soundspace resounds in a dreamy and reflective glow. Each perfectly paced part blends with the next, generating a galvanic energy of cosmic scale.

Chuck van Zyl believes in the potential of Electronic Music, and the possibilities of live improvisation. Confidence in this pursuit seems to ripple through him - so much so that we can almost see the creative current flowing right out through his fingertips. Continuing to seek the elusive aspects of music and expression unavailable in the studio - he hopes that you will join him at a concert, to uplift and inspire, to listen, and to truly hear his life.

Please view the complete video of this concert: youtu.be/QHJaUTLcc3o

Proceeds from the sale of "The Gatherings 9 December 2021" by Chuck van Zyl go to support the efforts of CIMA of PA, the IRS recognized, non-profit, all-volunteer organization which oversees The Gatherings Concert Series in Philadelphia