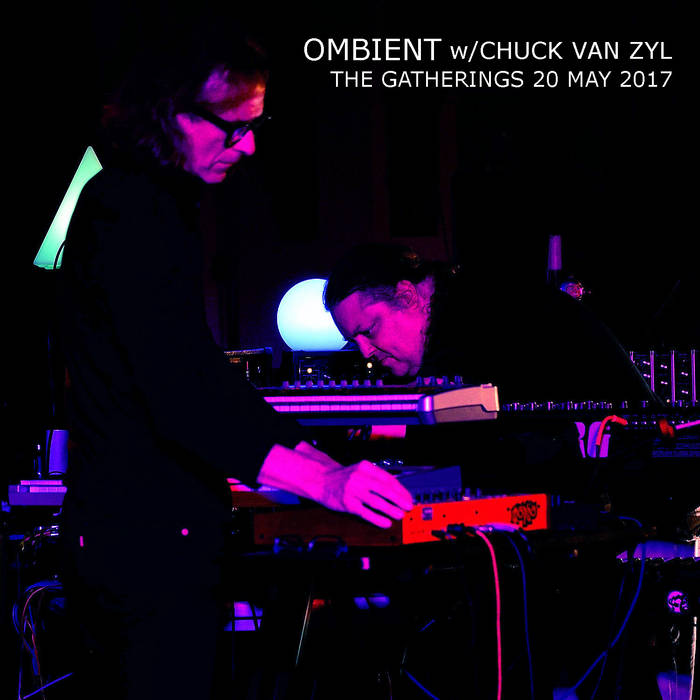 The album "The Gatherings 20 May 2017" presents the complete live performance by Ombient (Mike Hunter) and Chuck van Zyl during the 25th Anniversary Season of this most venerable innovative music series. Their realization "KL-93" was made live, in the heat of the moment, before an enthusiastic, informed audience. As these conditions are known for revealing the creative spark, we find both musicians and their listeners experiencing this extraordinary music together in the act of being made.

Without laptops or pre-set software this duo endeavors out into a realm made up of hardware electronics and mental reverie. Minor key Mellotron chords slowly sweep across the sound field. Synthetic drones hold, dim, then lighten. In an ascending rush, then a descending calm, with our imaginative sonic aviators we depart our more common thoughts... for mysterious regions. Bass laden drones soon swallow a melodious Mellotron flute solo, which lilts blessedly above a maelstrom of writhing timbres. Wrapped in a luminous halo of reverberation a string section rises from the rumbling tempest, before the introduction of Hunter's signature breathless tone patterns - which mount, repeat, and seem to echo out across eternity. A demon behind the sequencer he forgoes the white heat of computer technology - for realizations of mechanical, electrical and analog origin. Utilizing several cases worth of sacramental modular synthesizers, in a secret ministry of sound he performs a most welcome digital detox on the audience.

In propulsive bristling fervor, tumbling sequencer patterns motor on in echoing perfection. The notes brighten, darken, modulate, add and subtract, in a futuristic syncopated minimalism Spacemusic fans have been fascinated with for decades. In a withheld energy these echoing interlocking runs of notes produce a mounting compositional tension, released in our minds as impressionistic cerebration. Every new ascent presents the classic sound of one or another vintage synthesizer, and a shivery reverence that defies explanation. With each turn, these Spacemusic mystics manage to conjure a stimulating atmosphere of mystery, adventure and motion. From its plutonium dense gray desolation and battles with extreme silence, to twinkling modulations and multiple rows of rolling sequencer patterns, we move - west with the night. Arranged under an atmosphere of netherworld sonics, the composition "KL-93" throbs powerfully and bounds outward along an electrified musical current.

This work, and that of contemporaries such as Arc, Cosmic Ground, Free System Projekt, Node and Redshift, draws on higher-order capacities. Theirs is a minimalism that speaks volumes. By carefully exploiting the intrinsic technological limits of 1970s Electronic Music Mike Hunter & Chuck van Zyl enlarge the medium's expressive range and prove this genre is an organism that continues to grow and change with each new manifestation. Today's artists hope to elevate the Spacemusic experience to one of mystical proportions - as they continue to push this sound as far as it can go.

Please view the video excerpt of this concert: youtu.be/jYKxD3hOK30

Proceeds from the sale of "The Gatherings 20 May 2017" by Ombient w/Chuck van Zyl go to support the efforts of CIMA of PA, the IRS recognized, non-profit, all-volunteer organization which oversees The Gatherings Concert Series in Philadelphia.